We’ve all seen the screensavers; crystal blue beaches, crisp white sand, snorkeling with tropic fish. It’s what desk job day dreams are made of and when you do eventually get to do it, it’s worth every background refresh.

Mr John and I were spoilt with a 5 island tour with iLe Aux Cerfs Watersports, while visiting Mauritius last summer courtest of the LUX Grand Gaube. Unfortunately, there had been a miscommunication as the hotel told us we were going on a catamaran resulting in us dressing for a catamaran/garden party. WELL! It turned out to be a speed boat tour and had zero sun block. EISH. None the less, we had an incredible day so I would still highly recommend the adventure. Starting early in the morning, around 9am, we arrived at the Ile Cerfs Watersports office. Communication was minimal so we were super sure as to what was going on. But we had all day so weren’t worried. Shortly afterwards, we were chaperoned to the beach where we climbed on a speed boat and met our tour guides Jarryd and David. 5 Island Tour of Mauritius with Snorkeling

This was an incredibly quick stop to the Marianne Nature Reserve, which is filled with incredible volcanic rock and a shallow beach for easy access. The shallow water allows you to see fish darting by as the boat floats past. (Enjoy me, bottom left, making my way to the island in a pink dress. EISH.) The Flouquest islands or Ile Phare (Lighthouse Island) is the first island that we visited on our excursion. We didn’t actually know the trip would entail getting off the boat so, needless to say, it was a sudden awakening to what we would really get up to on the day. Clothes and shoes ruined, it was totally worth it because “when in Rome”!

On one side of the island is a lagoon and on the other side is the big, wide Indian ocean. Entry point is on the lagoon side and is totally safe to visit. The main feature is a lighthouse which was built in 1864 and operated for 200 years. It was the first island that the Dutch discovered in 1598. Now in ruins, it offers some beautiful views back towards mainland Mauritius and across the ocean. Wondering what to pack for your boat tour? Here’s my top 10 list!

At the edge of the calm waters in Mauritius is Dalblair shipwreck at Pointe D’Esny, just off the reef. The ship sailed from Scotland in 1895 en route to Mauritius and got stuck in bad weather (same ship, different day!). The old rusty bow sticks out of the calm waters as the stronger waves crash in the background, it’s a great way to give context to the waters of yesteryear. The iLe Aux Aigrettes is an absolutely beautiful speck of land. Guests are not allowed to explore the island, without permission from the government, as it is a precious nature reserve and island used for scientific research.

Visitors are, however, able to alight here for a lovely swim. Our hosts were also gracious enough to offer soft drinks or Mauritian rum. Again, when in Rome, I gladly accepted a plastic cup of rum and had a good float around! The hosts had a good time dancing around and enticing European visitors to indulge in ithe island lifestyle while floating in their water wings, rather hilarious!

These colours really do depict what the island looks like, it is truly vibrant and magnificent. After chillaxing and partying at iLe Aux Aigrettes we moved onto our next stop which focused on snorkeling. I’m pretty sure this is where I began to roast like a lobster, hint: the back of the legs were blood red. But it was so much fun swimming around in a more shallow bay and seeing so many amazing beautiful fish. I’ve heard Mauritius isn’t even that amazing any more for sea life, well that’s saying something because I saw SO much! Our final island stop saw us treated to some traditional sega dancing by young, Mauritian women and a casual meal of braai’d (BBQ) chicken, garlic bread and heart of palm salad. This was extremely rustic, but coming from South Africa I was happy. Dessert was a bruleed green banana which was delicious. At this stage, we were so incredibly sun burnt that we were happy to make our way home. The last trip back was about 40 minutes and it was welcomed after all the sun, sea and sand. David our guide, 100%. Me, exhausted! 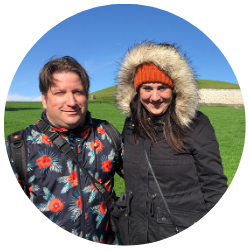